The @ Block is an item added by HermitQuest. It is used to summon the Hermit JoeHillsSays, more commonly known as 'JoeHills'. 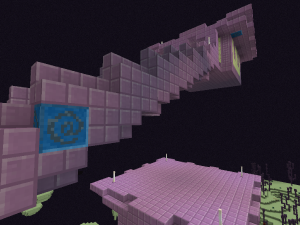 The @ Block spawns in End Cities.

The @ Block can be found in some End Cities. It appears as part of the End City structure, replacing some of the Purpur blocks.

As shown in the image, the @ block can spawn several times in one end city.