This page is about the Aerbunny added by The Aether. For other uses, see Aerbunny. 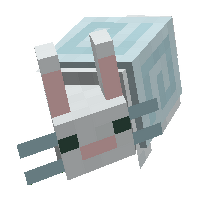 The Aerbunny is a mob in the Aether Mod which is a bunny that can float around by jumping repeatedly. These mobs, if right clicked, will be put on the player's head like a hat and you can bring them around with you. These mobs were added in update 1.02 with the Flying Cow and Whirlwind mobs.

An Aerbunny is a passive mob that was added in the v1.02 update. Aerbunnies can jump quite high and can "puff up" in mid-air to give a boost. When right-clicked on, an Aerbunny will appear on the player's head. It will stay there until you right-click on it again or until it dies. You must take caution not to jump into any ceilings or to walk into spaces only two blocks tall as the Aerbunny will suffocate and die quickly.

For as long as the Aerbunny is still there, you can jump more than two blocks high and can hold space to puff up for a boost and glide. In addition, you will not take any fall damage.

Aerbunnies increase the height of the player's jump even with a full set of Gravitite Armor. Although whilst gliding with the Golden Feather you can't puff up, the gliding ability will still be increased greatly.

When an Aerbunny is hit, it makes a strange screeching sound. With a Zanite sword or a better sword it takes one hit to kill an Aerbunny. A Holystone sword will kill an Aerbunny with 2 hits. Same goes as the Skyroot sword.

Aerbunnies cannot get off of 1 meter square ledges if they can't jump back up, even if they could go around diagonally. Thus, they frequently clump up in crowds on these ledges. Additionally, building a path for them will cause many to jump off in panic and fall off.

It is possible to "stack" Aerbunnies up onto your head, but this does not add any extra jumping or gliding abilities. Furthermore, right-clicking on them will cause them all to come down.

Occasionally, falling onto Cold or Gold Aercloud will cause fall damage, although puffing up momentarily (within four blocks) before landing will protect you.

If you shoot a poison dart at an Aerbunny whilst you are directly in front of it, you will be poisoned by your own dart, and gain all the abilities of an Aerbunny (jumping two blocks, puffing up, no fall damage) until you get re-poisoned by the same technique. Occasionally the game will glitch for a second and a bunny will drop off your head. However, you will not have any bunnies on your head, and you will not suffocate it when you go under 2-block-high spaces.

When there are 2 or more Aerbunnies in an enclosed room together it is likely a new one will be produced. By using this with the way that a Skyroot Sword has the ability of doubling drops you can continuously farm string from them.