The Barrier Stone is a block added by Thaumcraft 5. It acts like a Fence; it will prevent mobs, except the player, from walking on the top of the block.

Giving the Paving Stone of Warding a Redstone signal will disable its functionality, and so will putting another block atop it. 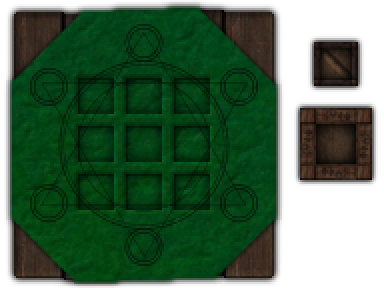 “
”
You have discovered a way of turning arcane stone blocks into mystical wards that will prevent most creatures from crossing them.
It should be noted that these wards aren't always 100% foolproof and they cannot prevent other players from entering an area, but they keep most common threats at bay. They will also prevent golems from crossing them.
For best results you need an unbroken line of them between the areas you wish to protect and the outside world.
An active redstone signal will disable this block.
— Thaumonomicon
“
”
The color of the runes above the paving stone indicates its current status.
Purple runes show that it is currently preventing something from passing through.
Blue runes indicates it has been deactivated with a redstone signal.
Red runes shows that something is preventing it from fully warding an area and a gap exists where something might be able to pass through.
— Thaumonomicon