This page is about the IndustrialCraft 2 BatBox. For other Battery Boxes, see Battery Box.

The BatBox is a Tier 1 energy storage unit from IndustrialCraft 2 that stores EU. The BatBox is capable of storing 40,000 EU and outputs 32 EU/t from the dotted side. It can be removed with use of a wrench with 95% safety; using an Electric Wrench in lossless mode will always remove the block safely. It is sometimes used in lower tier items to craft, such as the Electric Jetpack, which is the lowest tier of jetpacks. The BatBox is also a common temporary energy storage device for players that have just started a new world. This is often because it is reasonably easy to craft early-game.

The BatBox is created with 3 RE-Batteries, a piece of Tin Cable, and 5 wood planks. 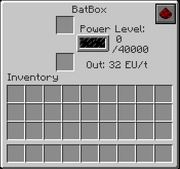 When placed down, the BatBox will have a dot facing the direction of the player; this is the output face of the BatBox. It can be rotated using a Wrench as well as removed with it. Right-clicking on the BatBox will bring up the interface for the device.

The upper empty slot near the middle will charge batteries and tools placed in that are compatible with IndustrialCraft 2, while the bottom slot will drain these items. The meter on the right displays the charge level of the BatBox as well as it's output voltage. The upper-right redstone symbol controls how it will interact with a redstone current. The settings are: