The Bus Transceiver is a redstone circuit added by Project Red. It is a logic gate for the controllable direction blocking of signal transmissions in Bundled Cables and Colored Bundled Cables (see Usage).

If the mod MineChem is installed, then you can decompose the Bus Transceiver with the Chemical Decomposer into specific chemical compounds of MineChem. 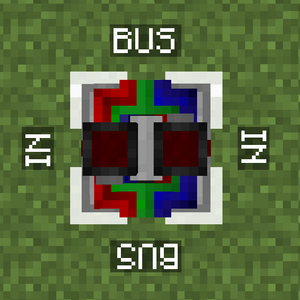 The Bus Transceiver from "Project Red". The gray bars next to the display indicate which direction is blocked in the bundled cables from each side of the gate.

For an easier usage, NEI and WAILA could be installed, which shows the input and bus sides on the Bus Transceiver.

The Bus Transceiver has two input/output side (BUS) for Bundled Cables and Colored Bundled Cables, and two input sides (IN) for Red Alloy Wires, redstone, an adjacent circuit or everthing that produces a redstone signal.

Additionally, the two displays on the cables shows the active channels of each controlled bus input.

Using the screwdriver from Project Red, the orientation of the gate can be changed freely in all four directions. With additional holding the crouch key you can switch the sides for the respective blocked direction.