This page is about the Cauldron added by Better With Mods. For other uses, see Cauldron. 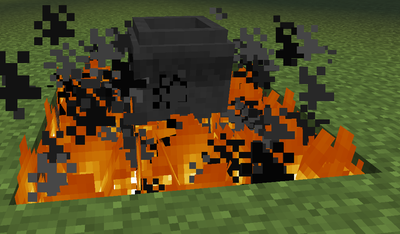 An Unstoked Cauldron with a 3x3 area of Fire beneath it for maximum efficiency.

The Cauldron is a functional block added by Better With Mods. It is used as a bulk cooking device that can cook large amounts of food at once. It is also used as a crafting method for creating many other blocks and items throughout the mod. It acts like a Chest, with 27 inventory slots, unless a flame is beneath it. Additional fires (up to a 3x3 area) beneath the Cauldron will increase its speed in cooking recipes as well as others, this also applies to Stoked Fires. When Mechanical Power is supplied to the Cauldron, it will tip in the direction the axle is powering from and dump out all of its contents onto the block it is facing. Cauldrons are generally paired with Hibachis underneath the fires for both longer fires and the ability to make Stoked Fires.

Other mods such as Better With Addons add their own recipes to the Cauldron, providing it with extra functionality.

To avoid overlap with vanilla Minecraft, the vanilla Cauldron has been renamed to "Cistern".

To heat up a Cauldron, light a fire beneath it. Logs will often be used early game for longer fires before the player has reached The Nether. The same method applies for Stoked Fires though they must be lit on a Hibachi.

Cauldrons have different recipe sets depending on what kind of flame is underneath them. These include the normal Fire and the Stoked Fire, which requires a more complex setup. Some of the main features of both types of Fires include: