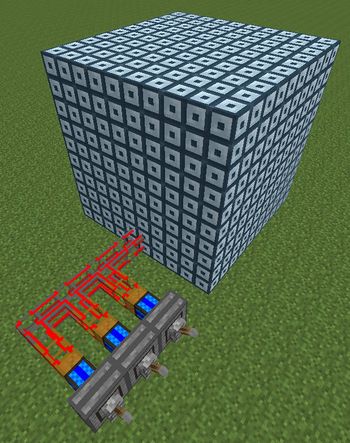 The picture shows a Fission Chamber with connected Stirling Engines from BuildCraft for energy supply.

The easiest way to build this multiblock structure is to buy or craft the Fission Chamber Blueprint and to generate the hologram of the chamber with the Blueprint Projector. For the construction you need 98 Tungsten Platings.

In order to operate the Chemical Fission Chamber, RF energy has to be supplied. This can, for example, done by means of generators of BuildCraft (shown in the picture). The chamber has also a storage for 100.000 RF.

To use the chamber, right-click on any point of the multiblock and it opens the GUI. On the right side are three tabs. The first tab shows the energy storage of the chamber, the second tab shows a short discription of the Fusion Chamber and the third tab is to support the authors. In the middle are two slots. The slot on the top is for the element that you want to split. In the slot at the bottom appears the product of the fission.