Clay soldiers is a popular mod in Minecraft. This mod is about small soldiers that fight for their color. Using an insane amount of weapons and armor, the soldiers will fight to the death to achieve the goal of being the last color team left alive in a battle. (If not a citizen or brawler.) The weapons and armor have to be provided by the player to the soldiers. Other than killing other color soldiers, soldiers could also be used by the player to attack hostile Mobs in old versions of the mod.

Now even newer clay men called Black Brawler (attack all, made by an Ink Sac) and White Citizens (never attack, no matter what, made by Bone Meal). (These were later removed, in favor of them being a behavior upgrade. Wheat and Nether Wart.)

This mod also includes Easter eggs of soldiers with rare skins. These soldiers are either the skins of the developers of the mod, famous YouTube players, or mobs.

How to create Clay soldiers and Shear blades[edit | edit source]

To craft a Clay soldier, You need a Clay (Block) with Soul Sand on top. Each will make 4 soldiers.

To color or change the material of your Clay soldier, put them into a Crafting square and use any Dye, Pumpkins, Melons, Coal, Redstone, or Cocoa Beans to change the type or color.

To create Shear blades, you put a shear on the crafting table and each will make 2 blades.

Just put two Shear blades on the Crafting Table and create a shear to convert back. 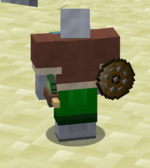 This gray soldier is well equipped with weapons and armor, this soldier has: Leather, Wool, Sticks & Flints / Arrows, Bowls, Lily Pads and a block of iron.

block of snow/snowball (shoots snow blocks off the nexus)

File:Blaze Rod.png
This Blaze Rod could be used as a brick-turning weapon against other colors of clay soldiers

Clay Soldiers can be upgraded with:

There are several Easter eggs in clay soldiers, so here is a list of them.

It was originally made by KodaichiZero, then development changed hands to SanAndreasP, SilverChiren, and much later CliffracerX working on the mod.