DamageIndicators is a mod by rich1051414 that adds a mob portrait to the game. A mob portrait is a small box that displays mob info, such as a closeup real-time animation of it, health, status effects, and creature type (hostile, neutral, arthropod, etc.), whenever a creature is in the player's crosshairs. DamageIndicators also adds a visual effect to creatures whenever they take damage or are healed. When a creature's health is altered, a small number displaying how much health was lost/gained will bounce off of them. The color of the number determines whether health was lost or gained. 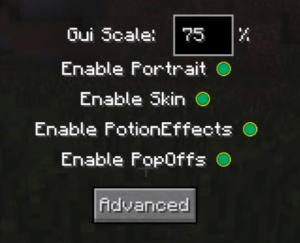 The basic config section with the default settings.

By pressing 'advanced' the player can adjust the position of the window on the screen and change its size for every mob individually. 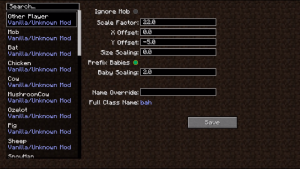 The advanced config section with the default settings.

Pressing period ('.') will open a simple config menu where the player can change the GUI scale (default 75%) and toggle the portrait, skin (i.e. any texture pack GUI for the window), the toggling of potion effect displays, and pop-off damage indicators.