The Evershifting Fountain is a block added by Astral Sorcery. It forms the core of an advanced multi-block. A Chalice must be placed on top of the fountain and supplied with Liquid Starlight for the structure to operate. Its exact function is determined by the Prime attached to the fountain's bottom side.

The complete structure is 9x5x9 and requires (on top of the Fountain):

No other block may be placed inside the ring. 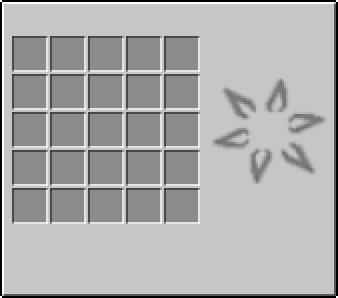 “
”
Liquid starlight in its basic concept is a rather strange substance. Condensed energy in a stable, rather easily manageable state compared to the starlight itself that's rather inconsistent and hard to handle.

Releasing the energy that liquid starlight harbors in a controlled manner to channel its energy as desired might be extremely useful.

A device, able to both withstand the stress that returning liquid starlight into its former state brings along.

While such a machine is now possible thanks to the new crafting options, an additional focus-ring will be required around it to ensure nothing of the energized liquid starlight gets lost during its conversion process. For safety measure, nothing may be placed within that inner circle of the structure.

As the now called "Fountain" runs its processes with liquid starlight, a sky-view is not required in order for it to run. However, as its work process is very delicate, it will only accept the liquid starlight from a chalice filled with it that sits directly on top of the fountain block itself.

The fountain is only the preprocessor of starlight. The functionality that the resulting energy is used for, depends on the prime that's used together the fountain and placed below the block itself.
— Astral Tome