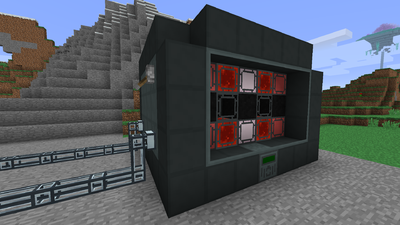 A solid-fuel fission reactor consists of a controller and a reactor core. The core is then filled with your choice of Reactor Cells, Coolers and Moderator blocks. Building the frame of the core is simple, but choosing the right combination and configuration of parts to go inside is tricky!

This section details the mechanics of how NuclearCraft's fission reactor components interact.

Managing heat and power, while getting the best efficiency, is the core challenge of NuclearCraft's fission reactor.

Jox, a member of the NuclearCraft Discord server, created a spreadsheet that both assisted with Fission Reactor calculations and tabulated the products of fuel reprocessing. It was updated by the mod author to include information on which fuel is most efficient in the design being tested, and can be found here: Spreadsheet

The following blocks should be placed down inside the reactor core:

This is the main component that creates energy and heat.

Moderator blocks such as Graphite provide an efficiency boost but will also produce additional heat. Although moderators will generate additional heat wherever it is placed in the structure, it will only generate extra power if adjacent to at least one Reactor Cell.

The additional power generated per moderator block is equal to

RF/t for each adjacent cell, where cellEff is the efficiency of the cell. Similarly, the extra heat generated is

H/t. If it is not adjacent to any cells, additional power will not be generated and extra heat equal to the fuel's base heat output will be generated. In addition, if two cells are connected by a straight line of at most four moderator blocks, the cells behave as if they were adjacent, becoming more efficient.

Coolers remove heat from the reactor core. There are several different types of cooler and each has its own set of conditions under which it operates.

The main challenge in NuclearCraft is figuring out how to arrange the cells, moderator blocks, and coolers. Placing cells next to each other boosts efficiency but results in a lot more heat. Using graphite blocks can increase the efficiency and add space to insert more coolers. Diamond, Emerald and Cryotheum coolers do a lot of cooling, but may be too expensive for you before late mid-game.

This subsection is for suggestions and tips on how to proceed with this task. Your mileage will vary so be careful. In this process you'll have to go in and out of the reactor core quite often so you might want to replace two Reactor Casing blocks with a Reactor Door.

After you've built the reactor and chosen which fuel you want to use, place down a single reactor cell then put in a Fuel Rod in the Controller. The Controller will show the figures for efficiency, power, and heat. Now go back in and place another Reactor Cell. Check the controller and see how the numbers have changed. You'll need to experiment a lot!

A fission reactor will continue to operate even when the internal energy buffer is full. To avoid wasting fuel, a tool such as the RF Monitor from RFTools can be employed to send a redstone signal to the Fission Controller if the buffer is below a certain percentage. Note that the presence of a redstone signal turns the reactor on. 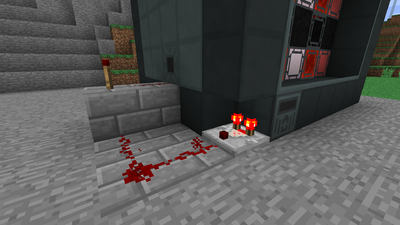 Monitoring the heat level with a redstone comparator loop

A fission reactor that overheats will undergo a meltdown and random blocks of the structure will melt into radioactive corium. Placed against the controller block, a comparator will emit a signal proportional to the heat level of the reactor, and output a full signal if it exceeds 50% (this can be altered in the mod's config file). By inverting this signal and feeding it back into the controller or a fission port, the reactor will only operate if the heat level is below 50%.