This guide is on getting started with Immersive Engineering. It is meant to get you up and running like a pro.

Note: this guide assumes that you are using the latest version of Immersive Engineering (version 0.12-84 for Minecraft 1.12.2). If you're using a version for 1.7, the recipes might be different, but it all mostly should be the same.

You'll also want an Engineer's Hammer. This handy tool can be used for a lot of things.

Immersive Engineering, like many mods, has its own villager and villager house. The Engineer's House is pretty much guaranteed to have some useful loot in it, and the Engineer Villager can help get you a few useful things in exchange for those Emeralds.

If you find an Engineer Villager, you'll probably want to mark and protect it. Their deals really aren't half-bad.

They aren't super-vital, but you'll need them later for some things. Note that Industrial Hemp requires at least a light level of 12 to grow.

You can make an Improved Blast Furnace after producing a bit of steel with your crude blast furnace. The improved version allows automated inputs and outputs.

Redstone Flux is supposedly magical, but in Immersive Engineering it acts a bit like electricity. There are three voltages: low, medium and high at 256 IF/t, 1024 IF/t, and 4096 IF/t respectively. Different voltages shouldn't connect; if they do, very bad things will happen.

From this point on, you'll want an Engineer's Wire Cutters. It's how you disconnect Wire Coils.

Immersive Engineering has few, but very distinct power generation options. For your basic power, your best bet is using a Kinetic Dynamo or a Thermoelectric Generator.

The Kinetic Dynamo requires a Water Wheel, a Windmill, or an Improved Windmill. The Water Wheel can generate more power, but it requires Water which can be awfully messy. If you go the Windmill route, then you might as well create an Improved Windmill instead of a regular one. It costs a lot of Industrial Hemp Fiber, but if you have a good Hemp farm (like I told you to do) it's pretty cheap.

The Thermoelectric Generator generates energy based on the difference in temperature between blocks/liquids adjacent to it.

For example, Ice and Lava together will generate 16 RF/t. 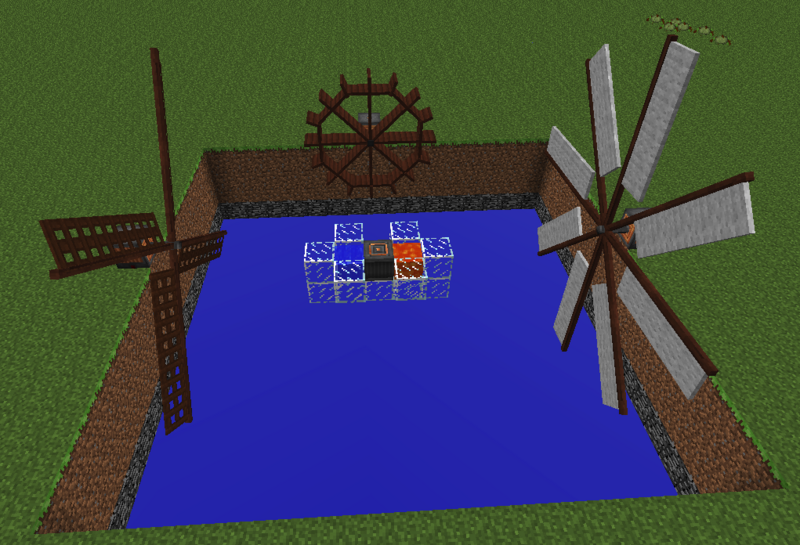 From the left to the right to the center- the basic Windmill, the Water Wheel, the Improved Windmill and the Thermoelectric Generator.

Energy can be stored in a LV Capacitor. There's also the MV Capacitor and the HV Capacitor, but you might not be able to afford them quite yet.

Like in many other mods, Capacitors can be broken and picked up, storing its energy, without any adverse effects.

Each side of the block has a certain configuration- no dots indicates no energy input or output can occur, one blue dot and one orange dot indicating an input, and two orange dots indicating an output. Right-clicking the capacitor with your handy Engineer's Hammer will change this configuration (shift-right-clicking will change the opposite side).

The LV Capacitor can store 100,000 IF. This is a pretty good amount for your basic usage. If you want to know how much energy it stores, you can right-click it with an Engineer's Voltmeter. Or, if you're one of the 99% that has WAILA installed, you can simply hover over it.

Rhetorical question: what's the point of making, storing and transmitting energy without using it for anything? Well, there's pretty much no point whatsoever. If you set up an energy system to create, store and transmit energy, but don't actually use it, then maybe you should talk to someone.

Immersive Engineering, fortunately, gives you plenty to do with your energy. The most basic example of this is the External Heater. It, unlike most similar mods, is not an RF-powered Furnace; it is a block which powers the vanilla Furnace through IF.

It needs to be placed next to a Furnace to function. Right-clicking one of its sides with an Engineer's Hammer will allow that side to accept IF.

The Furnace will be able to smelt items without any fuel by taking energy from the External Heater. Initially, the External Heater will consume up to 32 RF/t, but once the Furnace reaches its optimal temperature it will only need around 8 RF/t to stay warm. However, it will still use 32 RF/t total; the other RF used will be used to speed the Furnace's smelting processes. If efficiency is preferred over speed, that functionality can be disabled through a Redstone signal to the External Heater, making it only consume around 8 RF/t.

Many mods rely on automation: BuildCraft, IndustrialCraft, Thermal Expansion... the list goes on. Immersive Engineering, believe it or not, is also part of this bandwagon.

Liquids can be transported, too! Liquid transportation is a bit more complicated, though. You'll need Fluid Pipes and probably a Fluid Pump (Immersive Engineering).

Liquids will automatically move through Fluid Pipes, although at a slow rate (10 m/s). Using a Fluid Pump will speed it up dramatically (50 m/s).

What good is a mod if you can't do anything cool with it? Here are a few fun features of Immersive Engineering.

Immersive Engineering adds a Revolver. It can be used to, well, shoot things.

Shift right-clicking with the Revolver in hand will open it. It can then be filled with Cartridges. The most basic Cartridge is the Casull Cartridge. There's also more advanced Cartridges, like the High-Explosive Cartridge, which blows things up, and the Dragon's Breath Cartridge, which launches multiple bullets at once and sets things on fire. By the way, to make any Cartridges, you're going to have to make an Engineer's Workbench.