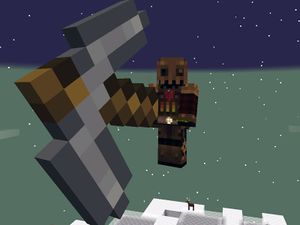 A player wielding a Giant's Pickaxe

The Giant's Pickaxe is a very large Stone Pickaxe added by Twilight Forest. It is dropped by a Giant Miner when killed. It has 1024 points of durability and it can be used to mine Giant Blocks such as the Giant Obsidian in the Obsidian Vault. If used to mine regular materials, the Giant's Pickaxe will attempt to mine connected blocks of the same type, up to a 4x4x4 cube. If a cube of Stone is mined, instead of dropping 64 Cobblestone, it will drop 1 Giant Cobblestone.