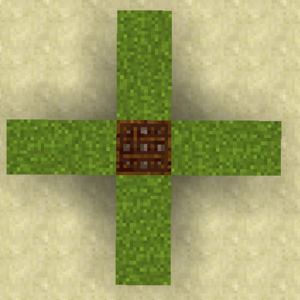 Illustration of the ground trap range. The Grass Blocks can be replaced by anything, but at least 5 are required to make the trap work.

The Ground Trap is a block added by Pam's HarvestCraft. It is a device used to generate land animal items. It needs to be placed in the world with at least 5 grass blocks in a 2-block range on the cardinal directions only at the same height level to work. It also requires Fruit Bait, Grain Bait or Veggie Bait to be provided before it starts producing items. The items produced by the trap are generated randomly, but some have a higher chance of being generated than others. Every time the trap tries to generate an item, a Bait is consumed.

The following items can be generated using the various types of bait.