The Guardian of Gaia is a boss mob added by Botania. It drops Gaia Spirits, used to craft several powerful items. It takes the appearance of the player's skin, but much darker.

To summon the boss, shift right-click a Terrasteel Ingot on an active Beacon with 4 Gaia Pylons nearby. Using a Gaia Spirit Ingot will summon a harder version of the boss instead.

The boss cannot be summoned in Peaceful mode, if there are no Gaia Pylons in proper positions, the arena has holes or obstacles in it, or if a Gaia Guardian is already present. 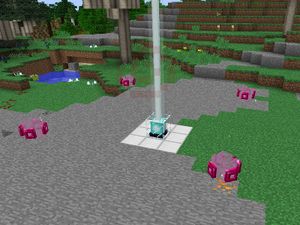 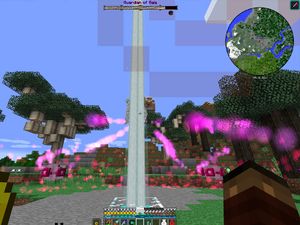 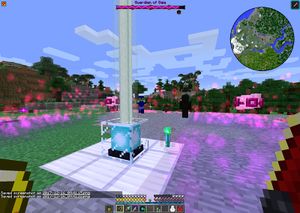 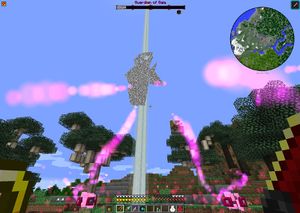 Invulnerable Guardian of Gaia during the summoning phase

When summoned, the Guardian appears 3 blocks above the beacon, filling its health bar up for 8 seconds, then falling onto the beacon. Hitting the Guardian or entering a 7×7 area around the beacon it will start the first phase.

The Guardian is immune to fire damage, and cannot take more than 25 (

The arena is a sphere with a radius of 12 blocks around the beacon. If no players are inside the arena, the Guardian will despawn.

If a player tries to leave the arena, they will be knocked back inside. Jumping too high might leave the player stuck floating above the arena in a multiplayer fight, or ending it in singleplayer.

Players inside the arena cannot fly using any methods granting creative flight, such as the Flügel Tiara or Angel Ring.

Positive, ambient status effects with duration below 8 seconds (such as those applied by beacons) will be removed from players.

The Guardian of Gaia teleports to a random place inside the arena every 3 seconds, or whenever it takes damage. When it teleports, it spawns a hostile Pixie that deals 8 (

) damage, and creates 6 Gaia Traps. If a player is standing between the Guardian's positions before and after teleporting, they will take 6 (

) damage) to all players inside their 5×5 area.

After the Guardian loses 80% of its health, it will float up, become invulnerable, and start spawning monsters.

Every 4 seconds, a wave of 4 monsters per player will fall from the area around the Guardian. The possible monsters are:

Spawned monsters that aren't immune to fire have Fire Resistance applied to them.

After spawning 10 waves of monsters, the Guardian descends and can take damage again.

This phase is mostly identical to the first phase, however the Guardian teleports around at a faster pace - every 2 seconds.

Killing the Guardian will drop loot at the feet of all nearby players who damaged the boss.

When the Ritual of Gaia is performed with a Gaia Spirit Ingot, the harder version of the Guardian of Gaia is spawned:

In addition to the standard drops, the Gaia Guardian's Head has a 7.7% chance to be dropped when killed with an Elementium Axe (and additional 7.7% per Fortune level).

The Will items reference Barrows brothers, 6 bosses of the Barrows minigame in RuneScape and Old School RuneScape.