Hydrogen (H) is an item and element added by MineChem. It has the atomic number 1 and the attributes Stable, Non-metal and Gaseous. It is a raw material for many compounds (especially organic compounds), to synthesize the Nether Star (see Usage), and can be used as fuel, e.g. in the furnace.

As upgrade for the Polytool, Hydrogen creates an explosion if the player hits an entity with the polytool.

Since it is an element, it can not be synthesized. However, it can be extracted from many materials, such as Water, Sugar Canes and Nether Stars, with the Chemical Decomposer. In addition, there are further sources from other mods. It can also be produced with the Fission Chamber. 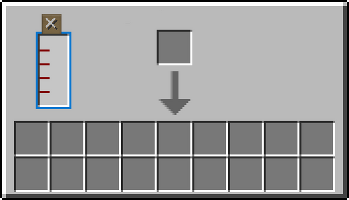 Hydrogen (H) can be stored in space-saving chemical buckets. This is especially for this element advantageous, bacause for the production of many chemical compounds and items, a large amount of hydrogen is required.

Real Hydrogen is a colorless gas, equipped with an atomic number of 1, the lightest elements in the periodic table and the most abundant element in the universe. At very low temperatures, Hydrogen can also be liquid and solid.