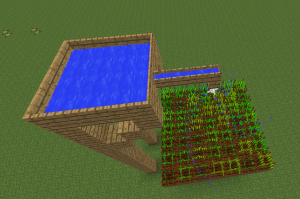 An example of an Irrigation System, note how the water level in the Channels match that of the Tank

The Irrigation System is a mechanic added by AgriCraft. It is a system made from Water Tanks, Irrigation Channels, Valves, and Sprinklers. The Water Tanks store the water, which get moved by the Channels and controlled by the Valves to bring it to Sprinklers. The Sprinklers then cover a 7x7 area up to 5 blocks below them, providing the crops with water and speeding up their growth. The Sprinkler's effects are additive, meaning the more working at a time, the faster crops affected by them grow.

Water is balanced between the Tanks and Channels. The less water in the tank, the less can be provided to the Sprinklers. Eventually, they will sputter out and stop working, so it's important to keep the tanks filled. They can be filled with rain, water buckets, or by pumping in fluid through other mods.