The Large Boiler is constructed as a 3x3x4 structure. The second layer from the bottom has the Controller in the middle front. Parts of the bottom layer are:

A finished Large Bronze Boiler looks like the image below: 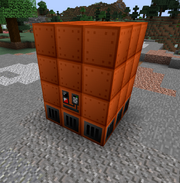 The Boiler can burn almost all forms of solid and semi-fluid fuel, except Lava (i.e., Creosote and Biomass). Unlike GregTech 5 Large Boiler it can NOT burn refined fuels. (Refined fuels are fuels that can be burned in a Diesel Generator.)

Large Boilers must contain water at all times while active. If at any point the Boiler runs out of water while it is active, it will explode.

The Large Boiler takes time to heat up before it can produce steam at its maximum rate. Higher tier boilers take longer to reach maximum heat. Boiler heat affects its Steam output, but not its fuel consumption.

As with all other GregTech Multiblock Machines: do not build a Multiblock over chunk borders. This can lead to unpredictable behavior, including wasted fuel and steam and easily including explosions due to loss of water. With NEI installed, chunk borders can be checked by pressing F9 (by default).

Burn time is always rounded up to the nearest integer.

For example, Alumentum has a burn value of 4800 ticks. The burn times for each of the boilers: