The Large Turbine is a multiblock generator added by GregTech 5 Unofficial. It is capable of producing large amounts of Energy Units (EU). It comes in 4 variants: Steam, High Pressure, Gas, and Plasma. The amount of Steam/Gas/Plasma used depends on the Turbine built in. It slowly speeds up, so it should be used for constant Energy supply.

The main Turbine block changes the fluids the turbine can run with.

The Large Turbine requires a turbine rotor. Turbine rotors vary greatly in size and material and contribute efficiency, durability and optimal flow modifiers to the running of the turbine. 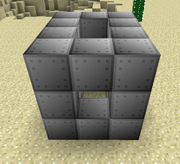 Build the edges of a 3x3x4 Block with Turbine Casings 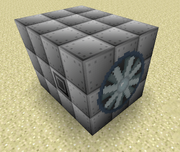 The Main Turbine Block comes in the front Center, the surrounding blocks become a turbine texture

The Large Turbine is assembled as a 3x3x4 (long) multiblock structure. The entire frame must be made from Turbine Casings.

The Front-Center of the multiblock must be a Main Turbine Block. The Back-Center must be a Dynamo Hatch.

The sides (including top and bottom) must include:

The remaining sides are Turbine Casings. The two center blocks remain air blocks. The 9 Blocks in front of the Turbine also must be air blocks.

Once the turbine has been started, it will continue in "On" mode until it is deactivated (intentionally or otherwise). It will not deactivate by running out of steam.

Optimal Flow is the flow rate required to achieve optimal output for the turbine. Each turbine rotor has a specific optimal flow rate, which is further defined by the type of turbine it is installed in (Steam vs HP Steam vs Gas vs Plasma). It is important to understand that the "Optimal Steam Flow" displayed on the tooltip for a Turbine Rotor is specific to the Large Steam Turbine. Optimal Flow for all Large Turbine types (including Steam) is calculated as:

To determine nominal flow rate, the actual nominal output must first be determined. Each Large Turbine type has a multiplier to the stated (tooltip) Optimal Steam Flow which is used in the calculation.

Fuel Values (not all listed)

A turbine's actual output is

is expressed as a percentage. A turbine can work with up to 150% of its optimal flow, but no power will be generated from the surplus. If supplied with less, the turbine will still run, but an additional efficiency modifier will be applied to the output as

. Therefore A Large Gas Turbine using a "10000 L/sec 110% Efficiency" turbine rotor has a actual output of

Large Turbines have a spin up time of 50 seconds and slow down over a period of 10 seconds, at which point they are not operating at full efficiency.