Meteorites are only found in the Overworld, and may spawn either on the surface or underground. They are not very common, so while one may stumble on a surface meteorite by chance, it is extremely unlikely that an underground meteorite will be found by pure luck. To locate meteorites, one may craft the Meteorite Compass, which will point to the closest meteorite, making it much easier to find them. 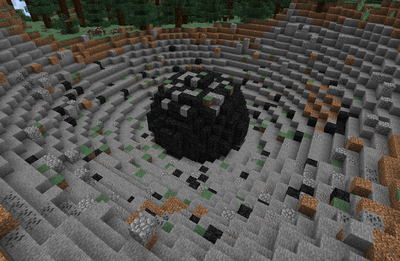 A Meteorite found in a Taiga biome.

Meteorites are made up almost entirely of Sky Stone, and may be as small as 5 blocks in diameter or large enough to fill a small vanilla chest with Sky Stone. Meteorites on the surface will be found in a crater, which may have random blocks scattered in the area (e.g. glass for a meteorite in a sandy biome), and the crater may also be filled with lava. Meteorites are almost perfectly spherical, and in their exact center, one may find a Sky Stone Chest. This chest is difficult to reach as Sky Stone has similar hardness to Obsidian. However, inside the chest will be one or more Inscriber Presses required to advance up the Applied Energistics 2 tech tree. It is likely that one will have to locate multiple meteorites to obtain all four of the required presses.