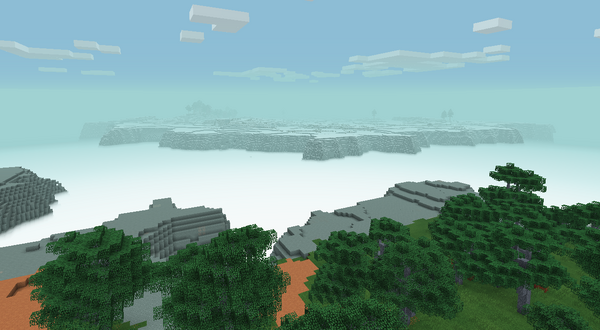 Mist is one of the most important features of the Misty World; the first thing that catches your eye when you approach the edge of any of the climatic zones. Fog fills all the lower levels of measurement.

Conventionally, the fog zone can be divided into “main (filling) part” and “upper border”. The properties of these parts are different.

The upper boundary is located at an altitude of 112 blocks by day and 104 at night and has a depth of 8 blocks. When viewed from above, it looks dense and has a white color. The highest fog density is observed at a depth of 4 blocks. Below this mark, it begins to decrease and already at a depth of 8 blocks, that is, directly below the upper boundary of the fog, it is compared with the density of the filling part. The fog takes on a grayish tint.

The fog is subject to daily fluctuations. The height of the upper boundary is changeable and with the onset of night it begins to slowly drop to a height of 104 blocks, opening up access to softer “porous” types of the stone. At sunrise, the situation changes, and the fog begins to rise to a height of 112 blocks, which can be dangerous for novice players..

The fog damages any living creature that does not have a Respirator, except for zombies, skeletons, golems, lava cubes and blazes. Damage increases when immersed in fog to a depth of 4 blocks. Further, if you are not in the central areas, the strength of the damage does not change. In the event of death, the player receives the message <Player Name> suffocated in the fog.

Staying in the mist without adequate protection can lead to an increase in certain player parameters, such as Intoxication and Chemical Pollution. These parameters are cumulative and, depending on the percentage of accumulation, can cause some negative effects. The accumulation value can be seen in the upper left corner of the screen or by clicking on a specially reserved button (by default I).

Each of the parameters increases as a result of certain influences. Methods of dealing with negative effects are also different.

Rain in the fog is just as dangerous and causes damage even if there is a respirator. In the event of death, the player receives the message <Player Name> dissolved in acid.

The relative humidity of the fog is 100%, so it also affects wet blocks, but instead of moistening, the fog poisons them.

Plants and trees of the upper regions in the fog die.