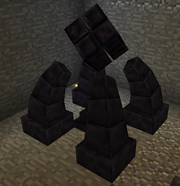 The Eldritch Infusion Altar added by Thaumcraft 5. Many multiblocks transform into other shapes when they are formed, such as this one.

A Multiblock (often stylized as Multi-block or Multi block) is a term defined as an in-game structure made out of (and usually requiring) multiple blocks in order to function. Examples include the Railcraft Blast Furnace and the IndustrialCraft 2 Nuclear Reactor. More recent examples include the reactors from Big Reactors and the Immersive Engineering Excavator. Usually when the blocks are placed in the right order, the multiblock must be finished by hitting a specific block with a tool.

Multiblocks are used across many mods, though some mod authors have criticized multiblocks, such as Vazkii, who parodized the idea of using multiblocks to balance mods in their mod The I Win Button.