Mutant Creatures is a mod created by thehippomaster21 that adds a number of fully animated mini-bosses that are essentially more enhanced and deadlier versions of their respective Minecraft mobs. It also adds custom drops from the new mobs, weapons, armor, and a new splash potion that can turn certain mobs into Mutants.

There are currently five Mutants with different abilities, physical traits, and attack tactics.

The Mutant Creeper is the most destructive mob from Mutant Creatures. It can be charged.

When the Mutant Creeper dies, it sucks all mobs and entities in a 16 block radius (larger if charged) towards it and after 8 seconds, creates an explosion similar in radius to the Wither's initial explosion. Directly adjacent mobs take up to 125 (

× 37.5) to elsewhere in the blast zone. Charged Mutant Creepers deal 50% extra damage and have a larger radius. The explosion is often enough to finish the player in a single blow, but can be escaped if they sprint as far as they can. If the death explosion kills other mutant creepers it can cause a chain reaction of explosions. It drops an egg that will eventually hatch into a mutant creeper minion.

The Mutant Creeper drops an egg at the center of the crater when killed. The egg hatches in 4 in-game days and becomes a Mutant Creeper minion that is under your control. It acts like a tamed wolf, but still has Creeper properties. It can be healed with Gunpowder and its maximum health can be increased by using Gunpowder on it when its health is full. Using TNT on it will prevent it from dying when exploding and increase the blast radius.

If the egg is destroyed before it hatches, it will either drop 5-10 Gunpowder, or, more rarely, it will drop a Creeper Shard. Creeper Shards deal 4 (

) points of damage when used to attack, but can also make explosions when right-clicked. The radius is determined by the Shard's durability. Hitting mobs with it increases its durability and knocks mobs away. At full durability, the explosion from the shard is similar to the Mutant Creeper's death explosion. These explosions do not harm the player. The Shard can poison the player.

The Mutant Zombie compared to the player

The Mutant Zombie is a beefy zombie that resembles the Hulk from Marvel. It is considered undead.

The Mutant Zombie has 4 attacks:

At night, it regenerates 2 (

) points of health every 5 seconds. It does not burn in daylight like normal Zombies.

When its health is reduced to 0, the mutant zombie will falls to the ground. However, it will get back up with 20 (

) points of health. There are two ways to permanently kill it: 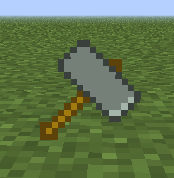 ) points of damage, or right-clicked to use the Mutant Zombie's smash attack; this can be done 72 times before it breaks. The durability does not decrease if used in combat normally.

Right-clicking on the Mutant Snow Golem will cause it to follow the player and display their username.

Throwing a Snowball at it heals it by 2 (

The Mutant Snow Golem drops 32–48 Snowball and a Jack o'Lantern.

The neutral, two-armed version of the Mutant Enderman

When a Mutant Enderman dies, it hovers above the ground, and lets out a final scream, and starts to depixelate. Its Endersoul will also become unstable and starts to deteriorate. It shoot out Endersoul Fragments that explode after a few seconds. Most of the damage and impact from the exploding fragments can be prevented by wearing a pumpkin.

The Mutant Skeleton is a dangerous creature that you don't want to encounter. Standing at around 3-4 blocks tall, this Mutant is armed with a more powerful crossbow, instead of the bow a regular Skeleton uses. He also features a gigantic ribcage, a serious case of under-bite, and powerful, bone-chilling attacks. It has been known to snipe players away from a distance farther than any other Mutant can sense you. And like a Mutant Zombie, it can heal 2 (

× 80) hearts every 5 seconds at nighttime, making this monster a harder enemy to deal with at night.

One of the Mutant Skeleton's most common and feared attacks is its ranged attack. It will aim it's crossbow at you, pull back, and fire an arrow straight at you. This is no common arrow, though, because it can go through all blocks and entities to hit you. It can also inflict a random negative effect on you, such as poison, exhaustion, and slowness. But if you manage to hit the Mutant before it fires at you, you might be able to break its focus, causing it to misfire.

If you try to get close to the Mutant Skeleton to whack it with a sword, then you will be in for quite the surprise. The Mutant will use his melee attack, which is just simply whacking you with his crossbow. While it doesn't give you much damage, the attack will push you quite far away from it, giving it the chance to use its ranged attack again.

This is an attack you will almost never be able to avoid. When the Mutant Skeleton does the multi-shot attack, he jumps high in the air, while simultaneously firing many arrows at the same time at you. Fortunately these arrows don't deal random negative potion effects like on the ranged attack...

When you look at a Mutant Skeleton, you might wonder why he has such a huge ribcage. Let's hope you don't have to figure it out the hard way... The Mutant Skeleton is able to use its ribcage to constrict the life out of you, which will toss you high into the air. This is one of the Mutant's most damaging attacks, dealing attack and fall damage.

When you kill this Mutant, its bones will be flung apart, which can hurt you if one hits you. If you are still alive after that is over, congratulations! Victory is yours!

The scattered bones of a Mutant Skeleton

Chemical X can be thrown onto a mob to transform it into its Mutant form, if it has one. There is a 50% chance that it will turn into a Mutant and 50% chance it will just kill the mob. If it is not thrown directly onto a mob, it will randomly pick a nearby mob to infect, with no preference if the mob has a Mutant form it can change into or not.