This page is about the NOR Gate added by Project Red. For other uses, see NOR Gate.

The NOR Gate is a redstone circuit added by Project Red. It is a logic gate for complex redstone circuits. It emits a redstone signal if no signal reaches the gate (see Usage). The difference to the NOT Gate is the number of inputs and outputs.

The circuit would be possible with Vanilla redstone mechanics, but this block reduces the size of the circuit to 1 block. This makes complex circuits clearer and easier to control.

In electronics, this gate enables the physical execution of the Boolean function "NOR" (negated OR). 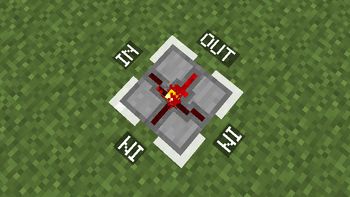 For an easier usage, NEI and WAILA could be installed, which show the input and output on the NOR Gate.

The NOT Gate has three input sides and one output side for red alloy cables, redstone, an adjacent circuit, machine, lamp or anything that can be controlled with redstone signals.

If there is no redstone signal on the input sides, then a redstone signal is emitted on the output side. If a signal reaches one of the input sides, then no signal is transmitted through the output side. Due to this property, the gate is called an inverter ("a signal causes no signal," respectively "no signal causes a signal").