Occulus is a block added by Ars Magica 2 (AM2). It allows the player to unlock spell Shapes, Components, and Modifiers via Skill Points. In addition, Talents such as Mana Regen Boost and Color are unlocked thorough the Occulus and the player's depth in certain Affinities can be viewed in its Affinities tab. 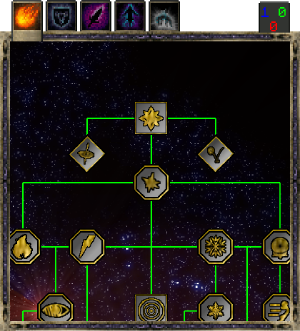 Tabs are the Occulus's way to categorize spell parts (Shapes, Components, and Modifiers)- They are grouped into three separate tabs according to their effects.

In addition, Talents and Affinities are given their own separate tabs in this tab.