The Oil Drilling Rig is a multiblock machine added by GregTech 5 Unofficial, used to pump oil or natural gas. Oil can be refined into plastics to use as crafting components, and both oil and natural gas may be refined into fuels for gas turbines or diesel generators.

Build Solid Steel Casings, hatches, and the Controller in a 3x3x1 to form the bottom layer. Above the center of this layer, build a 3x1x1 pillar of casings. On each side of the pillar, place a Steel Frame Box. 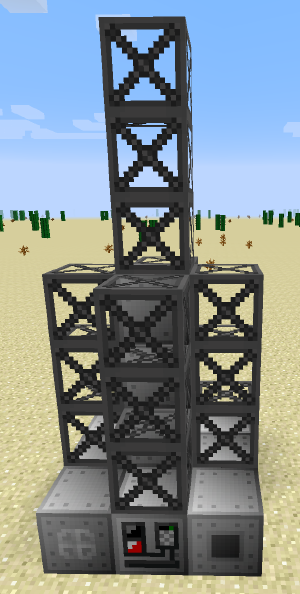 The Drilling Rig must be provided with Mining Pipes in the controller block's top-right invisible slot to function. To easily place the pipes in this slot, shift-click on them from the inventory. The drill will dig down, extending its mining pipe until it reaches bedrock, or until it reaches the void beneath a void world. When the mining pipe cannot extend any further, the rig will begin to pump any oil or gas found and place it in its Output Hatch.

Each oil source covers an area 96x96 blocks in size, which is exactly 6x6 chunks. Oil sources do not overlap. The amount of oil in each oil source is chosen pseudo-randomly using its position. There is a ~28% chance that the oil source will not contain any oil or gas. Of those that do contain something, there are equal chances that it will be Natural Gas, Light Oil, Raw Oil, or Heavy Oil. Each oil source has a base rate at which oil or gas may be extracted. The rate varies between 1-625L, weighted toward smaller rates (half of the usable sources will have rates of 65L or less, and only 18% of them will have rates of 300L or more).

The base rate is the amount extracted by a Drilling Rig during each processing cycle. The duration of the Rig's cycle depends on its voltage tier. At LV tier, a cycle lasts eight seconds. Each tier above LV decreases the cycle time by half, so at Insane Voltage, the cycle time is down to 0.5 seconds. Each cycle reduces the base rate of the oil source by 1/1000 of a litre. This causes the oil source to appear to deplete by 1L every 1000 cycles. Eventually, the base rate will deplete to zero and no further oil may be extracted from that chunk.

Fortunately, each chunk begins with its own base rate. After one chunk is depleted, the Drilling Rig may be moved to another chunk within the 6x6 oil source to resume drilling at the original base rate.

Initially, the only way to find an oil source is to build a Drilling Rig, let it run until it reaches bedrock, and see what is in its output hatch. Upon reaching HV tech, it is possible to build the Seismic Prospector to search for oil more efficiently.

Since the oil sources do not overlap, they will form a grid of 6x6 chunk areas that extends throughout the world. This grid begins at the origin point X=0, Z=0. Thus, one oil source covers the area X=0-95, Z=0-95, another covers X=96-191, Z=0-95, and so on. This pattern can be exploited to ensure that each oil source is only checked once during exploratory drilling or seismic prospecting.