The Path Marker is an item in BuildCraft that creates lines for a Builder to follow to build multiple copies of a structure. Unlike Land Marks, Path Markers do not need to be on the same axis. The farthest distance Path Markers can be placed from each other to activate is 64x64x64 blocks from the Path Marker. 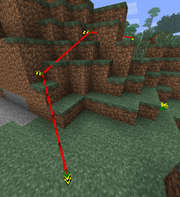 Powering a Path Marker with a Redstone Torch will create a blue beam that helps line up Path Markers on the same axis, if needed. This beam will pass through terrain for up to 63 blocks.