Pipe Wires are four types of wires added by BuildCraft (Red, Blue, Green and Yellow). They can be placed on Transport Pipes, Kinesis Pipes, Fluid Pipes and the Cobblestone Structure Pipe, and works as redstone signal transmitter (like vanilla Redstone) for interactions between almost all gates of BuildCraft (see Usage). Following table shows the 4 types of Pipe Wires and which gates can interact with these: 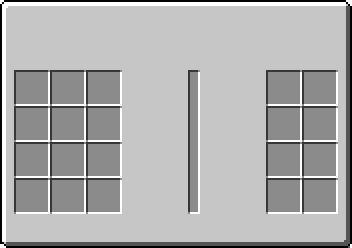 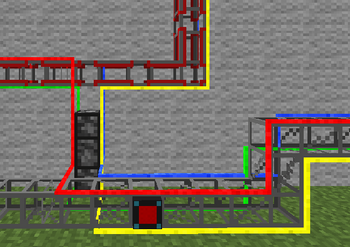 A Diamond AND Gate interacts with all four types of Pipe Wire to transmit redstone signals. Pipe Wires on different pipe types can be connected via Cobblestone Structure Pipe.

Pipe Wire can be placed with a simple right-click on a pipe, and can be removed by sneaking and a right-click. Each wire has his own edge on the pipes (shown in the picture).

When Pipe Wire is placed on a pipe, gates on the same pipe can be set to output a pipe wire signal when a certain condition is true. Then, a gate on the another pipe can detect if a pipe signal is on and output a redstone signal. This in essence allows a player to have redstone signals travel down pipes. For further information see the page of the specific Pipe Wire (Red, Blue, Green, Yellow).