The correct title of this article should be /r/feedthebeast. However, it is inaccurate due to technical reasons.

The logo used on the subreddit and Discord.

The subreddit focused on modded Minecraft, including news and discussions on various mods and modpacks. Each week, there is a pinned thread created by AutoModerator cycling between "Tips 'n' Trick" (for sharing tips and tricks), "Work-In-Progress" (for sharing work-in-progress in-game builds) and "Free-For-All" (for questions or sharing, or anything related to modded Minecraft).

Wanting /r/feedthebeast to focus on discussion of mods without being bombarded with server advertisements and users reporting crashes, the moderators of /r/feedthebeast made two new subreddits: /r/feedthebeastservers, for advertising modded servers, and /r/FeedTheBeastCrashes, for getting help with crashes. Other associated subreddits include /r/TestPackPleaseIgnore for Test Pack Please Ignore and /r/AlienMC for AlienMC, although both are inactive.

AlienMC was a server also created by and for the /r/feedthebeast community for Minecraft 1.7.10. The original server used the Test Pack Please Ignore modpack, but it later restarted and used a custom AlienMC modpack. The server ended up being severed from the community and was rebranded as "Black Sun Network"[4]. A new modpack and server called Black Sun was created for Minecraft 1.10, but the server went down and the modpack has been abandon.

/r/feedthebeast has an official Discord called the Modded Minecraft Discord. It is moderated by the subreddit's moderators, plus volunteer "police." It is one of the largest modded Discords, with over 5500 members, behind the Technic Discord with 30,000 members. It has a list of other modded Discords in its #mod-guilds channel. The Discord is officially partnered. 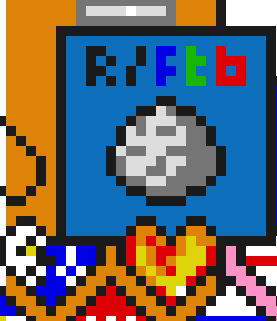 In order to participate in Reddit's April Fools experiment, /r/place, the /r/feedthebeast community created a blue box with a the characters "r/ftb," Clay and a Dragon Heart under it, near a flag created by /r/ireland[9][10].