This page is about the RS Latch added by Project Red. For other uses, see RS Latch.

The RS Latch is a redstone circuit added by Project Red. It is a logic gate for complex redstone circuits and allows changing the active output via the selection of two inputs in two different modes (see Usage). 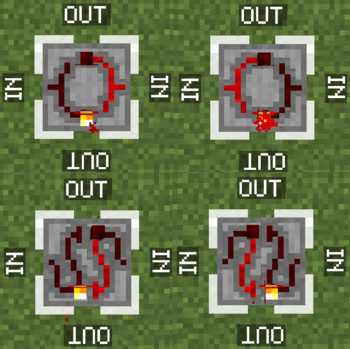 For an easier usage, NEI and WAILA could be installed, which show the input and output on the RS Latch.

The RS Latch has two input and two output sides for red alloy cables, redstone, an adjacent circuit, machine, lamp or anything that can be controlled with redstone signals.

Also it has two modes, each with 2 sub-modes. Using the screwdriver from Project Red and holding the crouch key, you can switch between the modes shown in the picture. Without the crouch key, the orientation of the gate can be changed freely in all four directions.

The first is the I/O-O mode with the sub-modes clockwise and counter-clockwise (shown in the picture). In this mode the input sides functions also as output.

If a redstone signal is received at one of the inputs, the adjacent lying output depending on the sub-mode, and the input itself is activated and transmits a redstone signal. The emitted signal remains active when the incoming signal is terminated, which means that at the inputs only a redstone pulse is necessary to activate the redstone transmission.

Now, if the redstone signal is no longer active at the first input and a signal or pulse arrives the second (opposite) input, the output is changed and the, again depending from the sub-mode, adjacent lying output and the input itself is active. Here also the emitted signal remains active when there is no signal at the second input.

The second is the I-O mode with also the sub-modes clockwise and counter-clockwise (shown in the picture). In this mode, the inputs can only receive signals.

Likewise, in this mode, no signal is emitted when a redstone signal receives both inputs.