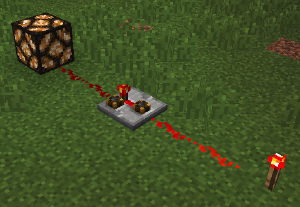 A Redstone Relay with an input set to 5 and an output set to 5, powering the Redstone Lamp.

“
”
You have always been curious about the seemingly negative reaction between mystical devices and redstone signals. You have studied the matter and while it is a well-known phenomenon that redstone inhibits magic, you have discovered that in specific circumstances the opposite can be true as well.
One practical application of this is the Redstone Relay. By sending a redstone signal through a magical substance like vis crystals you can inhibit it as much or as little as you want.
— Thaumonomicon
“
”
Relays are placed much like redstone repeaters with their output side marked by a redstone torch.
Unlike repeaters relays have two toggles - the rearmost one determines the minimum input signal required to overwhelm this inhibiting effect and allow the relay to activate.
The front toggle (next to the redstone torch) determines how strong the redstone signal is that the relay will output once it is active.
— Thaumonomicon