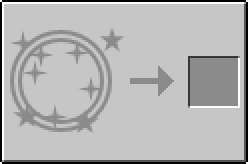 “
”
Liquid starlight's unique properties cause it to interact with certain solid materials in several very useful ways. Especially Aquamarine gems seem to react almost violently to liquid starlight. When immersed, they almost immediately begin to absorb the liquid, vibrating and shimmering quite energetically as they do so. The result of this reaction is a resonating gem that constantly pulses with energy.

This process however is not very stable and the effect fades as soon as the gem leaves the liquid.

However, a device, specifically built to induce liquid starlight into mundane materials, should be enough to keep this effect on the Aquamarine persistent. Building on past designs designing just the structure it needs should be almost trivial. The structure will need to include the liquid starlight it requires for the infusing. The infusion process can be started the same way as the altar.

The process of infusing something with liquid starlight is a very energetic one, so only one item at a time can be held by this delicate device. On the upside though, most of the time it doesn't even consume a single bucket of the liquid.
— Astral Tome
Retrieved from "https://ftb.gamepedia.com/index.php?title=Resonating_Gem&oldid=691610"
Categories: