The Robot Picker is a Robot added by BuildCraft. It is able to pick up items on the ground and store them in a Chest (see Usage). It is useful for picking up mined blocks from another Robot such as the Robot Miner, Robot Lumberjack or Robot Shovelman. 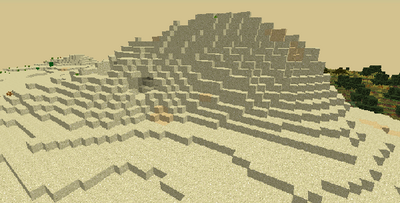 In this example, the Robot Picker works with a Robot Shovelman to pick up all shoveled Sand and store it. The robot automatically picks up items on the ground, as the name implies, and can be used to pick up Sand from the "Shovelman" Robot The setup described below guides the reader in building a functional Robot Picker, working in tandem with a Robot Shovelman on an example sand hill shown in Fig. 1. 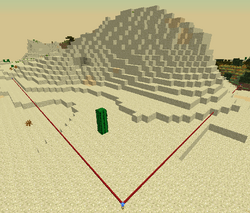 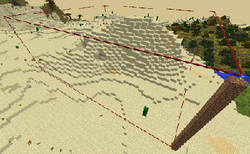 If a new work zone must be demarcated, place three Land Marks in a 90° angle which defines the base of the sand hill. Right-click on one of the marks to display red borders (shown in Fig. 2) which show the ground area of the work zone. The two marks on the left and right in the figure may not be more than 64 blocks away from the center mark. To set the height of the work zone, place the fourth Land Mark directly over the center basal Land Mark at the desired height (Dirt or Sand may be needed to reach said height).

Right-click on any Land Mark and red borders will appear framing a 3-dimensional work zone (shown in Fig. 3). If no red border appears, the Land Marks are not in a 90° angle or are more than 64 blocks away from each other.

To pick up all blocks on the ground (including blocks which lie at higher altitudes), the Robot Picker needs a 3-dimensional zone which includes all possible surfaces. If the player uses the 2-dimensional work zone demarcated by the three ground Land Marks, the robot will only pick up items on the ground. Each dropped item outside the working area is not touched. 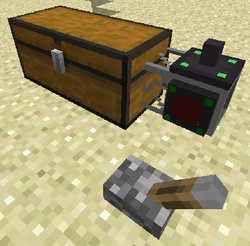 The player must build the control station for the Robot. It can be placed anywhere but it is recommend to place it near the work zone for easier access. The following described control station is the simplest and can be extended.

The station includes a double Chest with a connected Stone Transport Pipe, a Docking Station and an Emerald AND Gate which can be placed anywhere on the Pipe (without disconnecting the chest).

Place the Lever in front of the Emerald Gate. The station should look like the example in Fig. 4. 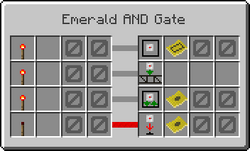 The Emerald Gate must be configured to control the Robot. The example given is one of many possible configurations.

Replicate the slots as shown in Fig. 5. In the first and third row on the right side are
signalling that a required item is missing.

Slots requiring coordinates can be added by using the Map Location.

The configuration should resemble Fig. 5 and the control station fully configured. The Land Marks and the respective frame are no longer needed and can be removed. If the player wants to use the frame for other Robots, make sure to have the coordinates stored in a Map Location. 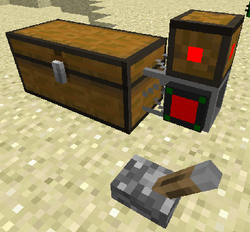 In the fourth and last step, the Robot Picker can be placed on top of the Docking Station (shown in Fig. 7). The Robot will initially do nothing because the fourth logic statement instructs the Robot to stay docked when no redstone signal is provided.

If the Lever in front of the gate is switched on and a redstone signal is provided to the gate, the first three rows become true and activate.

After a short time (the update time of the robot), the Robot will start working in the work zone (first logic statement in the Emerald Gate) (shown in Fig. 8) until no items are in the work zone.

Once the Robot is fully loaded it will return to the station automatically. Once there, the Robot unloads its collected items into the Chest and resumes working.

When all items have been collected in the work zone the Robot automatically returns to the control station but will remain active. It will resume work, when a new item is dropped in the work zone. The Robot can be stopped at any time by switching the Lever (in front of the Gate) off.

If the Robot is low on energy it will seek out a kinesis pipe with a Docking Station to charge itself. If none are available, it will continue doing its job until its battery dies. The player can also stop the Robot with attacks to prematurely drain its battery, causing the Robot to drop as an item on the ground. Stronger attacks will drain its battery faster. The player can pick up the Robot and place it in the Charging Table to recharge it. After that the Robot can be placed again on the Docking Station to resume work work.