The Robot Planter is a Robot added by BuildCraft. It is able to plant seeds on Farmland (see Usage) and can subsequently be used in combination with the Robot Harvester and Robot Farmer for automated farming. The robot can handle any type of seed from vanilla Minecraft and mods. 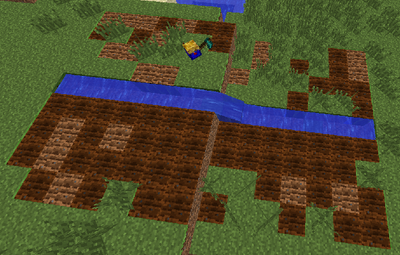 The Robot takes seeds out of a chest on and plants them on Farmland.

The procedure below describes how to set up a Robot Planter, using the example farm showin in Fig. 1.

The player must demarcate the area in which the Robot should plant the seeds. This can be done with either the Zone Planner (Step 1.1) or with Land Marks (Step 1.2). If the player does not demarcate a work zone and configure the Robot's behavior in Step 3, the robot will fly to every active chunk around the player and plant seeds on each vacant Farmland block.

Step 1.1: With the Zone Planner[edit]

The easier method of demarcating a work zone is to use the Zone Planner. It can be used to draw a specific region on the interactive map and have it saved to a Map Location. If multiple types of seeds are used, the player can use different colors in the Zone Planner for quick marking of their respective zones.

A second way is to use Land Marks to define the work zone. Place three Land Marks in a 90° angle which defines the base of the farm. Right-click on one of the Marks to display red borders (shown in Fig. 2) which shows the ground area of the work zone. As shown in the figure the Land Marks must stand one block deeper to include the surface blocks.

The two marks on the left and top in the figure may not be more than 64 blocks away from the center mark in the right corner. To define height place the fourth Land Mark above the central Land Mark (some Dirt may need to be used to reach the desired height).

Right-click on any Land Mark and red borders will appear framing a 3-dimensional work zone (shown in Fig. 3). If no red border appears, then the Land Marks are not in a 90° angle to each other.

To plant at all height levels in the work zone, the Robot Planter needs a 3-dimensional zone. If the player uses the 2-dimensional zone defined by the three ground Marks, the robot will only plant seeds at the ground level. Farmland blocks outside of the work zone will not be planted on. 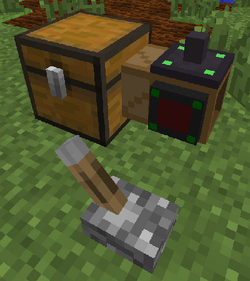 Next, the control station for the Robot should be built. It can be placed anywhere but it is recommended to be near the work zone for easier access. The following described control station is the simplest and can be extended.

The station includes a Chest with a connected Wooden Transport Pipe, a Docking Station, and an Emerald AND Gate which can be placed anywhere on the Pipe (without disconnecting the chest).

Place the Lever in front of the Gate and all seeds in the Chest. The station should resemble Fig. 4. 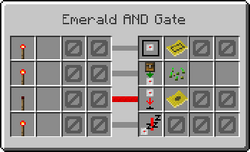 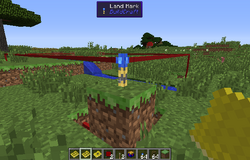 The Robot's behavior can be controlled by configuring the Emerald Gate. The example given is one of many configurations for the Gate.

Configure the fields so that they resemble Fig. 5. In the first and third row on the right side are
signalling that they are missing items in those slots.

The configuration should match Fig. 5 and the control station is fully configured. The Land Marks and their respective frame are no longer needed and can be removed. If the player wants to use the frame for other Robots (for example for the Robot Harvester, make sure to have the coordinates stored in a Map Location. 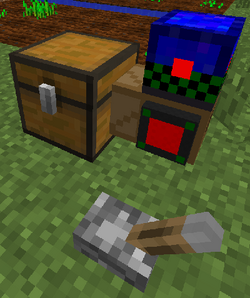 Place the Robot Planter on top of the Docking Station (shown in Fig. 7). The robot will initially do nothing because the logic statement in the third row instructs the robot to stay on the station when no redstone signal is provided to the Emerald Gate.

If the Lever in front of the Gate is switched and a redstone signal is provided to the Gate, the first and the second logic statements become true and activate.

Once seeds are planted on each Farmland block in the work zone, the Robot automatically returns to the control station but will remain active. If a Farmland block is freed up it will resume work. The Robot can be stopped anytime by switching the lever (in front of the gate) off.

If the robot is low on energy, it will seek out a kinesis pipe with a Docking Station to charge itself. If none are available it will continue working until its battery dies. The player can also stop the robot with attacks to prematurely drain its battery, causing the to Robot to drop as an item on the ground. Stronger attacks will drain its battery faster. The player can pick up the Robot and place it in the Charging Table to recharge it. The Robot can then be placed on the Docking Station and ready to resume work.