This page is about the Sequencer from Project Red. For other uses, see Sequencer. 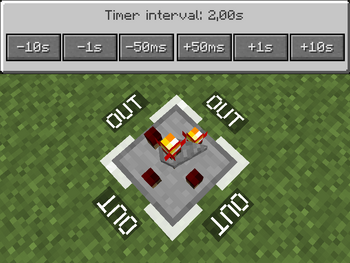 A Sequencer from "Project Red" with output sides indicated by WAILA and the GUI.

The Sequencer has four output sides for red alloy cables, redstone, an adjacent circuit, machine, lamp or anything that can be controlled with redstone signals.

With a right-click on the gate, you can set the time for a signal transmission on one output from 0.2 seconds till about 7200 seconds (2 hours), with an accuracy of 50 milliseconds (0.05 seconds), in 50 milliseconds, 1 second and 10 second steps.

If the sounds of the gate disturbing, they can be disabled in the "ProjectRed.cfg" configuration file (in the "config" folder) at the following line: