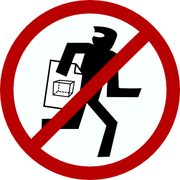 StopModReposts (associated under the hashtag #StopModReposts) is an organization, movement and website created in late 2014 with the goal of stopping or limiting the negative impact of mod repost websites.

It was mentioned by a BBC article and in an episode by popular YouTuber BebopVox in his news series, the Minecraft Monday Show.

The StopModReposts movement was largely active in late 2014 to 2015, but has dwindled from 2016 onwards.

The movement has had some success in informing users and taking down mods, but hundreds of mod repost websites still exist[1], likely only being marginally affected by the movement. However, it is likely that the creation of CurseForge has provided users a centralized site to download Minecraft mods as well as fulfilling mod authors' desires as CurseForge only accepts mods by the creators and rewards them for their services by giving Curse Points which can be redeemed for PayPal money or gift cards.