This page is about the Tesseract added by Thermal Expansion 4. For other uses, see Tesseract.

The Tesseract is a block added by Thermal Expansion 4 that can transfer Energy in the form of Redstone Flux (RF), as well as items and fluids to any other Tesseract regardless of dimension or location as long as the entry and exit chunks are loaded and they are on the same frequency. It requires no energy to operate and can be controlled with Redstone. You can also limit sending and receiving energy, items, or fluids using the GUI. They work on numerical frequencies from 0 to 999, which are publicly available. They can be upgraded with a Signalum Security Lock in order to access privacy settings, which also allow player specific frequencies in the same range. 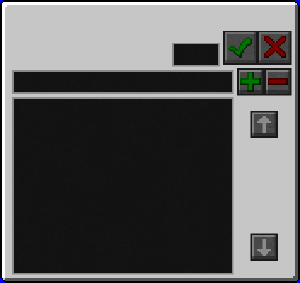 The GUI of a Tesseract

The Tesseract is used to instantly transfer RF, items, or fluids from one location to any other location regardless of distance or dimension. This only works if the Tesseracts are on the same frequency, the chunks they are in are loaded, and they are allowed to transfer the proper resource. There are no limits to how much or how fast the Tesseract can transport.

To the direct right of the GUI are the Redstone and Configuration tabs. The redstone tab allows configuring how the block reacts to redstone. When it's Disabled (the left button), the block ignores Redstone. Low (the middle button) makes the Tesseract turn off when a Redstone signal is applied, and High (the right button) flips this, making it turn on when it gets a redstone signal. Below the Redstone tab is the Configuration tab, which allows configuring energy, items, or fluids to be only send, receive, both, or neither.

When upgraded with a Signalum Security Lock, the Privacy Settings tab appears below the Configuration tab. The Tesseract when in Restricted or Owner Only provides player specific frequencies. Player specific frequencies are different than public frequencies, and belong owner of the Tesseract. No other player may use them, unless they use Tesseracts owned by the player. Other players cannot modify security settings. More information about this can be found on the page for the Signalum Security Lock.