From Feed The Beast Wiki
(Redirected from The Twilight Forest)
Jump to: navigation, search

The Twilight Forest is a mod created by Benimatic and ported to 1.12.2 by AtomicBlom, Drullkus, Tamaized, and williewillus. It adds the eponymous Twilight Forest as a new dimension. This dimension is a heavily forested world filled with new mobs, trees, dungeons, and bosses. This dimension's ground level is very low in response to the tall trees. The dimension is locked at sunset time, though sleeping is possible. Mobs will not spawn on the surface of the Twilight Forest, though they will in dungeons and caves. (EnderZoo mobs do not respect this peace.) 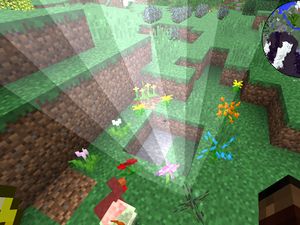 The Twilight Portal is struck by lightning on creation 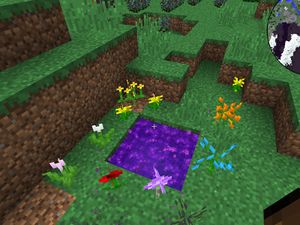 The Twilight Portal open and ready

Entering the Twilight Forest is done by creating a Twilight Forest Portal. A 2x2 pool of water only 1 block deep forms the basis for this portal; additionally it must be surrounded by "natural" vegetation including flowers, grass, saplings, and mushrooms. Once the pool is surrounded in this manner, the portal is completed by dropping a Diamond into the water. The water will turn purple (similar to a Nether Portal) and a bolt of lightning will strike the portal, inflicting minor damage to nearby players. Players may instantly travel to the Twilight Forest by walking or jumping into the newly created portal. Once the portal is activated, it is possible to remove the flowers around it while keeping the portal intact.

The majority of the Twilight Forest is a peaceful biome. Despite the perpetually dim conditions, hostile mobs will not spawn on the surface in the Twilight Forest itself. Instead, progression through the mod is centered around landmarks that serve to advance the level of difficulty encountered through increasingly challenging enemies and bosses. Chest items and drops become correspondingly more rewarding with each new area.