The Thermoelectric Generator is a block added by Immersive Engineering. It generates Redstone Flux (RF) through the difference in temperature between blocks/liquids adjacent to it. It does not have an internal energy buffer; therefore, if you try to inspect how much power it is storing with mods like The One Probe or WAILA, it will show 0 RF. 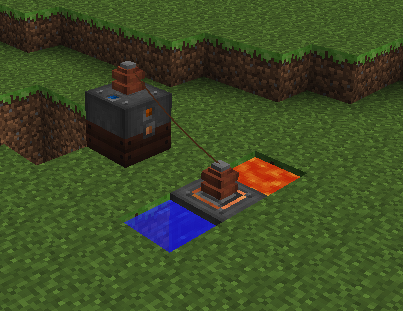 Above is a basic setup with Water and Lava.

The two liquids/blocks used should be opposite of each other; having one liquid be on the east of the generator and another liquid being on the north of the generator (for example) will NOT allow it to work. Having two sets of opposites will work and increase production. A third set of blocks/liquids can be used if the player has a viable way to extract the energy without using a block face; consequently, this would bring the max production to 93 RF/t.

*Uranium and Yellorium have the same temperature.