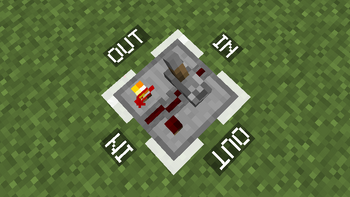 For an easier usage, NEI and WAILA could be installed, which show the input and output on the Toggle Latch.

The Toggle Latch has two input and two output sides for red alloy cables, redstone, an adjacent circuit, machine, lamp or anything that can be controlled with redstone signals.

It does not matter if at the one input is received temporarily a permanent signal and a redstone pulse reaches the gate at the other input, the active output is still changed by the pulses.

Furthermore, the output can also be changed manually using the lever on the gate.