The Treasure Shrine is a structure added by Astral Sorcery. It spawns in caves in the Overworld. It appears as a runed marble entrance way with no doors. Inside, there are four pillars topped with Sea Lanterns and in the center are two pillars reaching from the floor and ceiling with a gap in between. There is water in a plus shape surrounding the fifth center pillar. Nestled in the gap of the fifth pillar will be an ore block, including modded ore and ore from other dimensions such as The End. Mining that block will cause another randomly chosen ore block to replace it so long as the central pillars are not destroyed. Eventually, the ore will run out regardless of whether the pillars are intact. 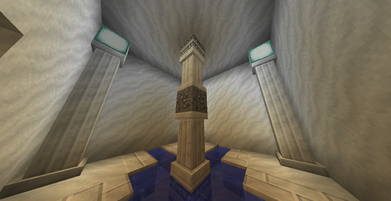