The Wireless Map is a tool that visually shows redstone frequencies that have been phase shifted, or colored, on a map. 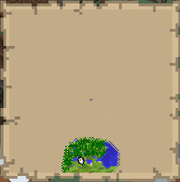 Wireless redstone signals must first be phase shifted (colored) using colored Lumar in the GUI of a Wireless Transmitter or Wireless Tracker. With the map in hand, simply hold the map in hand and look down. Wireless redstone signals that are 'On' will show as colored dots; those that are 'Off' will not appear on the map. The dots only represent the Wireless Transmitter or Tracker, not any Wireless Receivers. The map otherwise functions like the traditional Minecraft map and needs to be explored to show terrain.