As part of the Unified Community Platform project, this wiki and 38 others will be migrated to the new platform, with migrations beginning September 23rd at 7am CDT. Minimal changes are expected as part of this migration. Read more here.

From Feed The Beast Wiki
Jump to: navigation, search
This page is a translated version of the page Wrench (BuildCraft) and the translation is 9% complete.

The Wrench, added by BuildCraft, is the primary tool for manipulating the orientation of BuildCraft pipes and engines.

The wrench is used to manipulate the orientation of Wooden Transport Pipes, Wooden Fluid Pipes, Iron Transport Pipes and Iron Fluid Pipes. For a Wooden Pipe that is between two extractable machines or chests, right-clicking on the pipe with the wrench will change the side that items or liquids are extracted from.

Using the wrench on an Iron Pipe will change the output direction of items or liquids, since Iron Pipes have multiple inputs but only one output. 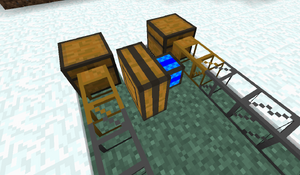 Right-clicking the Redstone Engine with the wrench changes which Wooden Pipe it will pump.

The Wrench reorients the direction of engines if there is an appropriate item block next to the engine, such as neighboring machines or pipes.

The BuildCraft wrench also changes the direction of the side face of machines from the Thermal Expansion mod.