This page is about the Yeti added by Twilight Forest. For other uses, see Yeti.

The Yeti is a hostile mob added by Twilight Forest. It is a small, white-furred ape-like humanoid mob which will attack players in close proximity to it. Like the Pinch Beetle, it will grab players, though it will throw them very far shortly afterwards. However, it has a very bad Eyesight and will only attack if you are very clouse to it. Beware:the yeti is very fast if it see you and charge at you 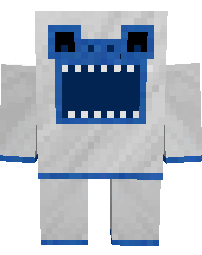