Please take a moment to fill out this survey on your gaming habits!

The Dandelifeon is a generating flower added by Botania. It produces Mana by simulating Conway's Game of Life in a 25×25 area around it.

When a redstone signal is applied to it, it will advance one generation every half second (10 ticks).

Each square in the 25x25 area is referred to as a Cell. Cells can have two possible states:

The state of a cell will change depending on the states of its Neighbours, which are the 8 squares surrounding the cell:

Botania has some additional rules over the original Game of Life.

The amount of generated Mana per consumed cell is equal to

- for example, the maximum amount of Mana generated by the flower at once is

(as it is impossible to create a setup filling more than 6 cells around the flower).

Complete up to date rules are listed in Lexica Botania.

A Dandelifeon can store 50,000 Mana internally, and can be bound to a Mana Spreader within 6 blocks to output Mana. 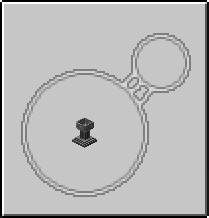