Feed The Beast (also known as FTB) is a launcher, community, and large group of modpacks created by the FTB Team. It originated as a custom challenge map that made heavy use of multiple tech mods, developed by a small team led by Slowpoke. It later evolved into into a launcher and many modpacks. 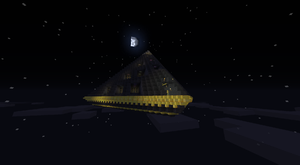 Slowpoke's image of "The Beast".

Feed The Beast was originally created as a custom challenge map, developed by a small team led by Slowpoke. It was announced on February 24th, 2012 on the Minecraft Forums[1]. The map was a Sky Block map; the player spawned on a small platform in a void world, and must overcome a series of challenges. Using the tech mods in the modpack, these goals would be checked and give rewards automatically.

The map was adapted to allow multiple players to compete against each other in a race to complete the objectives. This version gained large popularity after being live-streamed on Twitch.tv with Direwolf20 competing against Mattabase, both very well known users of the mods included in the map.

After the map was released, the FTB Team decided to simplify the installation of the modpack by creating a launcher to automatically distribute the map, mods and configuration for those interested in playing it.

The map went through various iterations, including the bedrock map - known for the challenge and reward structure made of bedrock. However most players that refer to the "FTB map" mean the pyramid map, known for its large basalt pyramid that included various rooms that listed a set of items the player had to create in order to solve each challenge. That version was then updated to a harder version, known as FTB Insanity, which took many players 50 to even over 100 hours of play time to fully complete.

After hearing about many players using the modpack without playing the modpack, Slowpoke announced the creation of a new, general kitchensink modpack on August 13th, 2012 with a post on the Minecraft Forums[2].

An important feature of the new modpack was the solicitation of permissions[3] from the mod developers prior to inclusion of that developer's mods in the FTB modpack, which had previously caused Technic controversy.

The modpack was centered around mods built using Minecraft Forge. It initially focused on mods of a technical theme, such as IndustrialCraft 2, BuildCraft, and RedPower 2, but it expanded to include magic mods like Thaumcraft 3 and Mystcraft.

The initial mod pack was released as a beta in November 2012. It stayed in beta status for some time because of the necessity for mod authors to update their mods to Minecraft version 1.4, where everything became server based. This process proved a long road for a few of the mods that were core to the pack.

Other versions of the FTB modpack were created, including a Lite version, which slimmed down the list of mods to assist new users learn the ins and outs without being overwhelmed. A Magic World version, which focused on mods of a magical nature, was also released.

Many recent FTB modpacks include built-in quests with Hardcore Questing Mode, and some focus on other themes and difficulties. FTB Infinity Evolved contained two modes: a normal mode and an "Expert Mode". In the Expert Mode, several of the recipes of various blocks and items were modified, forcing players to progress through many mods' tech trees in order to progress. FTB Infinity Evolved has sometimes been cited as the most popular Minecraft modpack in history.

The launcher was released during a livestream by Slowpoke101. The number of downloads initially overwhelmed the server, leaving many users frustrated. After resolving the server issues, a beta version was released. A website, feed-the-beast.com, soon followed. The first production release also suffered from the sheer number of downloads, but the issues were shortly resolved.

The main features of the launcher were:

On October 8 2019, it was publicly announced that the partnership between FTB and Twitch.tv had ended. As a result, on November 1 of that year, FTB planned to pull all of its content (modpacks and mods) from Twitch/CurseForge and migrate to self-hosting it. A revamp of the FTB Launcher was released on 6 April 2020.[4] Despite the announcement, the content has not yet been pulled from CurseForge