Grid Power is an energy system added by Extra Utilities 2.

In addition to, or instead of Redstone Flux, some Extra Utilities 2 items require Grid Power. Unlike other energy systems, Grid Power is player-specific, wireless, range-less and cannot be stored. Any generators placed will be linked to the player that placed them and contribute to that player's Grid Power pool. Grid Power can be shared with other players using the Power Sharing Command.

If too many of one particular type of GP generator is used, those generators become less efficient. Efficiency is 100% until the total GP produced by that type of generator exceeds a specific limit, upon which efficiency drops; there is usually more than one threshold, and the efficiency will continue to drop in steps as further thresholds are exceeded. To see these thresholds, which differ by generator type, hover over a GP generating block in an inventory and check the tooltip. Efficiency ultimately puts a limit on the amount of GP one particular type of generator can efficiently produce, forcing a player to build a number of different types of generators if they want large amounts of GP.

Earlier versions of Extra Utilities 2 do not have the efficiency mechanic.

Generators produce Grid Power through a number of methods unique to that type of generator. They contribute directly to the player's pool of Grid Power without any wires or connectors, so a generating block can be placed anywhere that is suitable. However, due to the nature of Grid Power, players will want to keep chunks with generators loaded. Chunkloading of generators is absolutely essential for devices which are carried by the player, such as the Angel Ring.

A player must build one or more of these generators first in order to power a Resonator, which allows the player to produce items that are required to craft the other generators.

The Manual Mill generates 15 GP. It is operated by right-clicking the mill. Turning or walking away from the Manual Mill will stop power generation.

The Solar Panel generates up to 1 GP during daylight hours, requires line of sight to the sky and is affected by rain.

The Manual Mill is recommended over the Solar Panel as it consistently generates more than the 8GP required to run a Resonator. It need only be run for a few minutes to cook enough Stoneburnt to make a few Water Mills or Lava Mills.

Lava Mills generate 2 GP from an adjacent block of Lava. The Lava Mill only benefits from one adjacent Lava block. Placing Lava against other faces will not increase the output.

Wind Mills generate approximately 1-2 GP from the wind. This value fluctuates constantly and receives a boost from rain and storms. Testing suggests that placement at higher altitudes increases the Wind Mill's output.

Fire Mills generate a steady 2 GP from being placed over Fire. A burning piece of Netherrack is ideal for this.

Water Mills generate up to 4GP per side that has flowing Water, allowing each block to produce up to 16 GP when water is flowing against all sides. Crafting requires Stoneburnt, which is created in the Resonator.

By placing Water source blocks in the spots indicated by sand, multiple Water Mills can be arranged to work at maximum output in a small amount of space. The illustrated pattern can be tessellated to minimize the space required while still providing maximum output. Note that more than four Water Mills in this configuration will begin to cause efficiency loss; see section above. 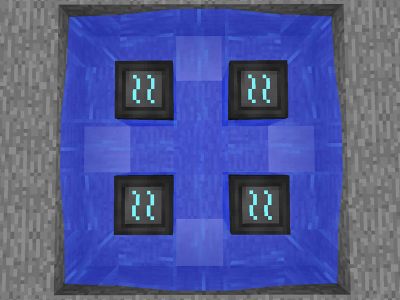