The Redstone Inlay is a block added by Thaumcraft 6. It is used to connect Stabilizers with Arcane Pedestals to prevent items from being knocked off Pedestals. It will light up when it is working properly. They also provide a slight stabilizing bonus, so placing them around the Infusion Altar in a symmetrical fashion is recommended. 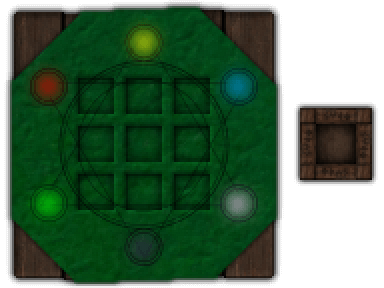 “
”
I have put together something I am calling, appropriately enough, a Stabilizer.
The core of the Stabilizer is made from a block of redstone that has been bombarded by vis. As a result it has become an instability magnet of sorts. Unstable magical energy is drawn to it and discharged as flux. While not ideal, flux is easier to manage than losing expensive crafting ingredients.
While Stabilizers provide a fair amount of stability to the infusion process when placed near the altar, they have a much more important function: When discharges occur that would normally knock items off their pedestals or even destroy them, the discharge can instead be redirected to the Stabilizer and absorbed.
Unfortunately the Stabilizer needs a little help to perform this function. Pedestals you wish to protect needs to be connected to the Stabilizer via Redstone Inlay. This is placed much like normal redstone and even has similar limits as redstone. For example the protective charge created by the Stabilizer cannot reach more than 15 blocks. Pedestals themselves act as redstone inlay [sic] and will propagate the protective charge. A properly connected pedestal will have runes appear at its base.
When an instability discharge hits a protected pedestal, the discharge will travel along the inlay towards the nearest Stabilizer and discharge there instead. This temporarily weakens the stabilizer and the protective charge will be reduced till the Stabilizer has had a chance to discharge the unstable energy as flux. I may wish to use multiple stabilizers to prevent overloading a single one and leaving some pedestals temporarily unprotected.
It should be noted that Redstone Inlay provide a small amount of stability themselves, so I should take care to keep their placement properly balanced.
— {{{author}}}